This Country is a mockumentary featuring comic siblings Daisy May and Charlie Cooper. The pair play cousins Kerry and Lee ‘Kurtan’ Mucklowe who live in a picturesque, rural village in The Cotswolds.

The premise is that a film crew follows the Mucklowes’ lives in their close-knit community, where young people are typically stigmatised and marginalised. But the feckless cousins constantly squabble as they struggle to retain respect amongst their neighbours. The opening episode mainly revolves around Laser Quest-loving Kurtan’s deluded attempts to win the first prize at the annual Scarecrow festival. He misguidedly thinks he has it all sewn up only to find that his shabby exhibit is so far away from the action that nobody is going to see it, never mind vote for it, so he has to hatch a dodgy plot to secure a victory. Other episodes include “Oven Space’, “Mandy'(the local tattoo artist), King Of The Nerds, GNVQ and Peeping Tom.

They’re surrounded by the typical supporting cast of eccentric characters, from Steve “Uncle Nugget” Nuggins to the local vicar (a brilliant Paul Chahidi), who tries to encourage the Mucklowes – although not too much. But This Country is subtler than most mockumentaries; the show always opts for sympathy over stereotypes, something that makes the characters richer, your support for them stronger and the laughs notably slower to build, yet more rewarding.

Produced by Josh’s Simon Mayhew-Archer and directed by Tom George, whose credits include the BBC comedy feed Limbo and the CBBC sitcom Hank Zipser.

The six 30-minute episodes, which the pair also wrote, will air on BBC Three on iPlayer from February 8 and will also be reappearing later in the year in series 2. 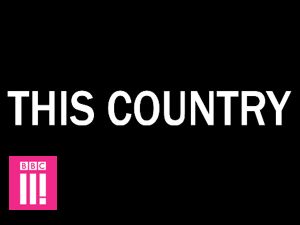 A six part mockumentary following the lives of Kurtan and Lee Mucklowe who live in a small village in the cotswolds.